A Mile in Her Shoes 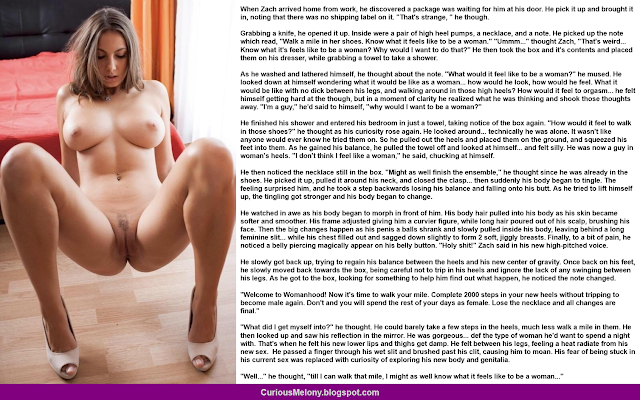 When Zach arrived home from work, he discovered a package was waiting for him at his door. He pick it up and brought it in, noting that there was no shipping label on it. "That's strange, " he though.

Grabbing a knife, he openned it up. Inside were a pair of high heel pumps, a necklace, and a note. He picked up the note which read, "Walk a mile in her shoes. Know what it feels like to be a woman." "Ummm..." thought Zach, "That's weird... Know what it's feels like to be a woman? Why would I want to do that?" He then took the box and it's contents and placed them on his dresser, while grabbing a towel to take a shower.

As he washed and lathered himself, he thought about the note. "What would it feel like to be a woman?" he mused. He looked down at himself wondering what it would be like as a woman... how would he look, how would he feel. What it would be like with no dick between his legs, and walking around in those high heels? How would it feel to orgasm... he felt himself getting hard at the though, but in a moment of clarity he realized what he was thinking and shook those thoughts away. "I'm a guy," he'd said to himself, "why would I want to be a woman?"

He finished his shower and entered his bedroom in just a towel, taking notice of the box again. "How would it feel to walk in those shoes?" he thought as his curiosity rose again. He looked around... technically he was alone. It wasn't like anyone would ever know he tried them on. So he pulled out the heels and placed them on the ground, and squeezed his feet into them. As he gained his balance, he pulled the towel off and looked at himself... and felt silly. He was now a guy in woman's heels. "I don't think I feel like a woman," he said, chucking at himself.

He then noticed the necklace still in the box. "Might as well finish the ensemble," he thought since he was already in the shoes. He picked it up, pulled it around his neck, and closed the clasp... then suddenly his body began to tingle. The feeling suprised him, and he took a step backwards losing his balance and falling onto his butt. As he tried to lift himself up, the tingling got stronger and his body began to change.

He watched in awe as his body began to morph in front of him. His body hair pulled into his body as his skin became softer and smoother. His frame adjusted giving him a curvier figure, while long hair poured out of his scalp, brushing his face. Then the big changes happen as his penis a balls shrank and slowly pulled inside his body, leaving behind a long feminine slit... while his chest filled out and sagged down slightly to form 2 soft, jiggly breasts. Finally, to a bit of pain, he noticed a belly piercing magically appear on his belly button. "Holy shit!" Zach said in his new high-pitched voice.

He slowly got back up, trying to regain his balance between the heels and his new center of gravity. Once back on his feet, he slowly moved back towards the box, being careful not to trip in his heels and ignore the lack of any swinging between his legs. As he got to the box, looking for something to help him find out what happen, he noticed the note changed.

"Welcome to Womanhood! Now it's time to walk your mile. Complete 2000 steps in your new heels without tripping to become male again. Don't and you will spend the rest of your days as female. Lose the necklace and all changes are final."

"What did I get myself into?" he thought. He could barely take a few steps in the heels, much less walk a mile in them. He then looked up and saw his reflection in the mirror. He was gorgeous... def the type of woman he'd want to spend a night with. That's when he felt his new lower lips and thighs get damp. He felt between his legs, feeling a heat radiate from his new sex. He passed a finger through his wet slit and brushed past his clit, causing him to moan. His fear of being stuck in his current sex was replaced with curiosity of exploring his new body and genitalia.

A Mile in Her Shoes

When Zach arrived home from work, he discovered a package was waiting for him at his door. He pick it up and brought it in, noting that th...